THE MAN
BEHIND POINT MAN

MEN ARE THE KEY

Steve Farrar grew up in the generation of the 60’s and 70’s, when sexual revolution was in the air and men were increasingly relegated to a place of irrelevance.  But he knew that a culture that rejects God’s creation plan for male and female is a culture that will collapse.

During his fifteen years as a pastor during the 70’s and 80’s, he increasingly found himself speaking to the men in the audience. He was acutely aware that what women and children wanted more than anything was the godly leadership of a good man—bold, intentional and sacrificial leadership, like the leadership Jesus exemplified when he walked the earth.

Steve first became known in 1990 when he wrote the bestseller, Point Man.  He began to focus exclusively on men in his writing and speaking at a time in which a movement of Christian men was taking place across the U.S and Canada. He quickly became known as a man who was uniquely gifted in communicating with men.

Steve was theologically astute, surprisingly empathetic, and refreshingly straightforward. He was the real deal.  He had a knack for hitting the target of a man’s need every time he spoke or wrote. His last book, the revised 30th anniversary edition of Point Man, proved to be a bookend both to his ministry as well as his life.

God loves men! And He has wired us to lead.

A MAN WHO CONNECTED WITH MEN

When he hit his early 40’s, Farrar began speaking at Family Life marriage conferences. He had an acute theological mind and was known for his style of speaking with candor, humility, and wit.  But it was in the men’s sessions that it became clear Steve possessed a unique ability to connect with men.  When he spoke, men listened.  “God loves men!” he would declare in those packed-out sessions. “And He has wired us to lead. Don’t let the world emasculate you.  God has called you to strongly lead, protect, and care for your family. When masculine leadership is properly channeled, it can be the most powerful weapon against the forces that would destroy your marriage and family.”

After these sessions, men began to come up and ask: “What have you written on this?”  They were hungry to know how to be the spiritual leaders in their homes.  But there was no such book available. That’s when the seeds were first planted for him to write.

While completing his doctorate at Dallas Theological Seminary in 1987, Farrar based his dissertation on original research of 1000 Christian men around the country.  What he learned was not surprising:  men who wanted to be the godly leaders of their homes were discouraged and woefully unprepared.  That year he set about addressing the need in his first book, Point Man: How a Man Can Lead a Family.

When he first approached publishers with this book in 1990, he was told Christian men don’t read. But as it turns out, Christian men DO read.  They’re just highly selective.  They don’t want to waste their time.

Farrar was unique.  He had his finger on the pulse of men and spoke their language. He was a man’s man at a time in which bold men were hard to find and godly masculinity was under all-out assault. “War has been declared on the family,” he wrote. “If you are a husband or father, then you are in a war.  Today, leading a family through the chaos of American culture is like leading a small patrol through enemy-occupied territory.  And you are the point man.”

He wrote conversationally and transparently. And he was a straight shooter, unafraid to say out loud what everyone else was thinking.  He talked about the hard things, the pressing things, the things that mattered to men.  Taking the Scriptures in hand, He spelled out how to step up.  How to fight. How to lead. And how—by God’s grace—to win.

Soon men who had never read a book cover to cover were reading Point Man.  For many Farrar was like the father they had never had. And their lives and families were being changed. To the surprise of the Christian publishing world, Point Man became a best-seller. It marked the beginning of a ministry of speaking and writing to men that would last thirty years.

If you can change the heart of a man,

you can change the direction of a family.

A MOVEMENT OF MEN

After Point Man was published in 1990, a movement of Christian men began to sweep America and Canada.  It began with Promise Keepers, where thousands of men gathered in stadiums across the nation to declare their desire to be men of God. Then came groups like Man in the Mirror, Gridiron, No Regrets, and many other ministries for men that arose to meet the needs of men–and continue to do so to this day.

Farrar spoke for each of these ministries as well as for his own conferences.  Wherever there were men, he was willing to go.  By the late 90’s he was speaking to 50,000 and 75, 000 men a year. And over the span of his ministry, he spoke to some 700 men’s conferences around the country.  He also wrote more than 20 books to men, such as Finishing Strong, Tempered Steel, King Me, and Manna.  Many of those books were translated into other languages.  Once his website was established, his weekly Dallas bible study, attended by several hundred men over a period of 20 years, became a rich weekly resource for followers around the globe.

Leading a family through the chaos of American culture is like leading a small patrol through enemy-occupied territory.

Today bedrock moral principles are being rejected with astonishing swiftness. Western culture has become totally secularized and is embracing the unthinkable.  Political and educational institutions are promoting the belief that gender is fluid, the family is an outdated institution, and male leadership is an evil, rooted in “patriarchal colonialism”.  Corporations are buying into this new wave of immorality and pressuring their employees to agree and comply.

Christian men find themselves living in an atmosphere of hostility on a level they have never experienced before. Such a stunning and massive cultural shift has left them demoralized and confused.  They are asking, “Can I still be a godly leader in a world of outright hostility?  How do I protect my family and equip my children to withstand the assault of evil that threatens to destroy their souls?”

In his newly revised version of Point Man, Farrar addresses these issues.  He wants men to know that they are still called to be the point men in their families.  And they can still lead them well.  Men are, in fact, still the key.  In each chapter, he recognizes the realities on the ground and addresses them with new depth. 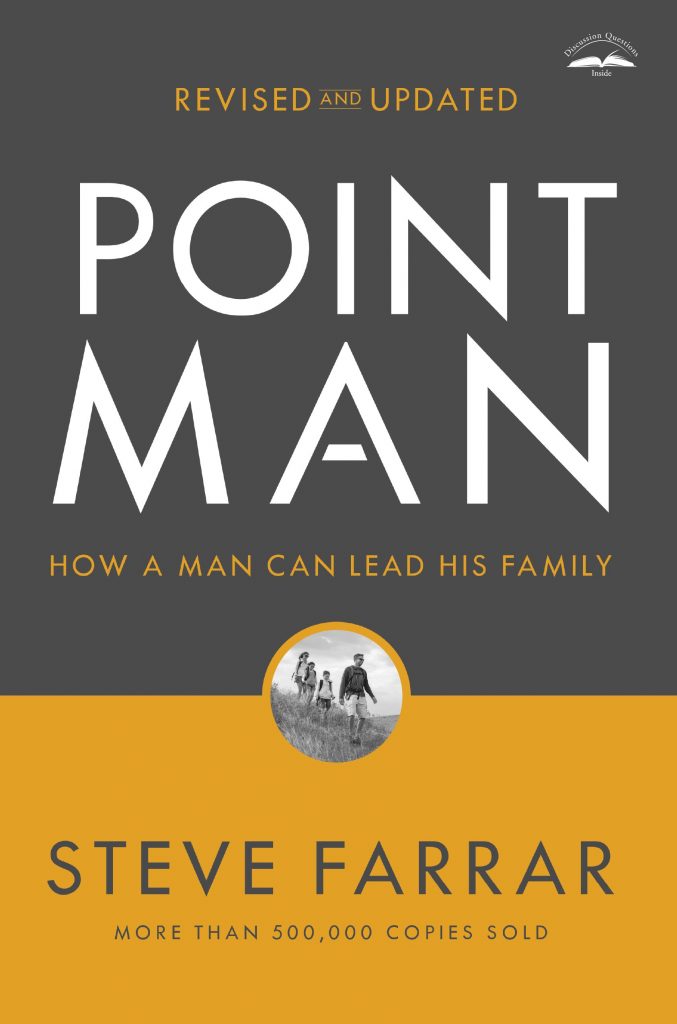 Restoring the Ancient Boundaries of Gender and Marriage:
A biblical response to the cultural lies that gender is fluid, gay marriage is to be embraced, and transgenderism is the solution to a troubled heart.

Save the Girls:
How a father can meet the deepest needs of the women in his life.

Start Your Own Nation:
How a man can lead his family through the most turbulent times.

THE LAST BREATH IS THE BEST BREATH

In February of 2022, two months before the newly revised book was to be released, Steve went to be with the Lord. He had finished what he declared would be his last book.  But he would not be around to promote it.   Those who knew him well knew he would have viewed his own death as an act of Providence.  Steve often taught that “we cannot die before our work is done”, that “Providence plans the moment of our birth as well as the moment of our death,” but for the believer, “the last breath is the best breath”.

At his memorial he was honored by his closest family and friends as a man who walked the talk and finished strong.  Over the course of his seventy-two years, he had proved to be an ever-growing teachable man, humble in spirit, yet powerful in faith.  Though he is with the Lord, his rich legacy of 30 years of teaching and writing goes on.

THE MEN BEHIND THE MAN

Steve was never a self-promoter. It just wasn’t in his genes.  His entire ministry happened word of mouth. And he refused to raise money. He was a voracious reader and had a remarkable grasp of Scripture.  You could always be sure if you tuned into Steve, he would talk about what was on everyone’s mind—with candor and wisdom.  He had a way of skillfully dissecting the times and equipping men to handle what was coming their way.  But this approach to life didn’t happen in a vacuum.  Steve’s life was shaped by several great men. 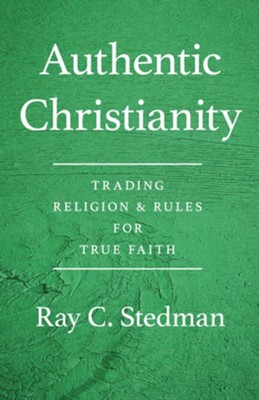 Ray Stedman, pastor of Peninsula Bible Church in Palo Alto, CA, through the 60’s and 70’s, taught Steve about authenticity in the pulpit.  Stedman was not your typical pastor; he would get up and share about his own failures–even fresh failures of the previous week.  Steve had never heard such honesty from the pulpit.  He saw the power of authenticity and determined to be authentic himself.  It became one of Steve’s hallmark traits. 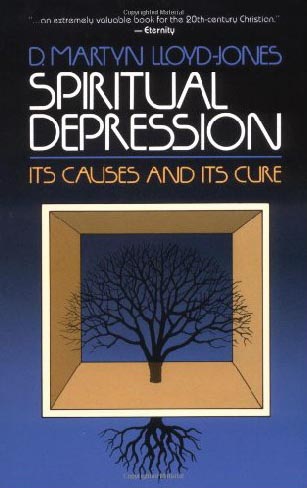 Martyn Lloyd -Jones also marked Steve deeply.  Lloyd-Jones lived in the 20th century and pastored at Westminster Chapel of London for 30 years, walking his congregation through the horrors of World War II.  Lloyd-Jones was a brilliant expositor, and as a former medical doctor, possessed a special skill in dissecting the human soul.  Lloyd-Jones’ book, Spiritual Depression, was life-changing for Steve when he went through a 2-year-long depression in his mid-thirties. Lloyd-Jones taught Steve about humility, contentment in obscurity, and the fundamental truth that “faith is a refusal to panic.”  Steve’s library holds every book Lloyd-Jones ever wrote, but his book Spiritual Depression is tattered and torn from having read it so many times. 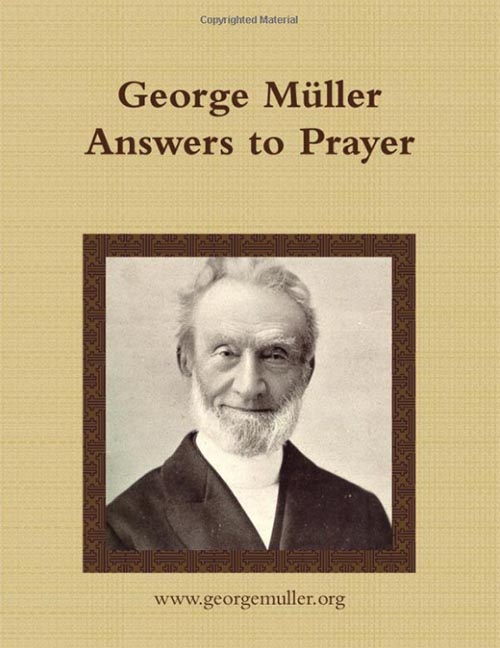 George Müller lived in the 1800’s and had an unusual impact on Steve.  Müller founded schools and orphanages for thousands of needy children in England.  Many orphans lived on the streets or went to poorhouses, where they were treated like slaves. In the Müller homes, each child was tenderly cared for, clothed, fed, and educated, with Christian instruction as the bedrock. When Müller died the streets of London were packed with people who wished to say goodbye to the man that had saved their lives.  But what Steve loved most about Müller was that he determined never to ask for money.  His only means of funding came through praying and trusting the Lord to provide.  Müller kept a dairy of how the Lord constantly provided, oftentimes just in the nick of time.  In his fifties, Steve became convicted that this was how the Lord wanted him to live as well.. 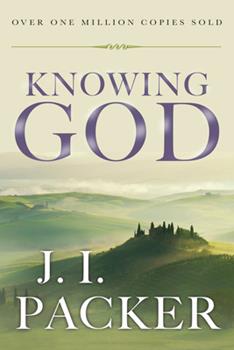 J.I. Packer, whose book Knowing God deeply impacted Steve, instilled in Steve a love for the Puritans and their profound grasp of the providence and sovereignty of God.  Steve’s shelves were full of Puritan writers whose books he loved.  Among his favorites were John Flavel and Thomas Watson. These men opened Steve’s mind to the biblical teaching that God can be trusted, that He is sovereign and good, and that His providence is the fundamental attribute that will steady a man in the worst of storms.